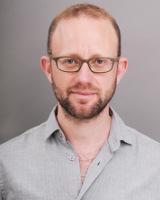 One of the most prominent Israeli conductors of his generation, and particularly active in the fields of opera and contemporary music. A graduate of the Jerusalem Academy of Music in piano and conducting, in 2002 he joined the Young Artists Programme at the Royal Opera House, Covent Garden in London where he conducted several premieres and worked as an assistant to Sir Antonio Pappano as well as a repetiteur and coach for various productions.

He worked in some of the main opera houses in Europe including Glyndebourne, the Liceo and Aix en Provence, and collaborated with leading conductors such as Daniel Harding, Kirill Petrenko and Iván Fischer.

Between 2008-2012 he was Kapellmeister at Oper Frankfurt, where he conducted wide repertoire including I l trittico, La traviata and The Turn of the Screw as well as several premiere productions. He conducted, amongst others, at the Israeli Opera, Oldenburgisches Staatstheater, London Philharmonia, Bochumer Symphoniker, Ensemble Modern, Israel Contemporary Players, Ensemble Meitar, Jerusalem Symphony Orchestra and at festivals such as the Münchener Biennale and the Ruhr Triennale.

He teaches conducting at the Jerusalem Academy of Music.