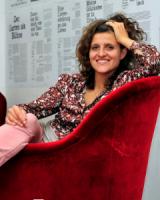 Yasmeen Godder is an internationally renowned choreographer and dancer. Godder was born in Jerusalem and raised in New York City  where she graduated from the High School of the Performing Arts and received her BA from the Tisch School of the Arts at NYU. In 1999, she moved back to Jaffa, Israel where she is established her dance company. Her extensive body of work is known for its depth, impact and complexity and is presented throughout the world at renowned venues like: Lincoln Center Festival, Tokyo International Festival, HAU in Berlin, the Place Theater in London, Montpellier Dance Festival in France, Kunstenfestdesarts in Brussles, the Sydney Opera House.

Yasmeen is the recipient of numerous awards, including the prestigious Bessie Award in NY, The Israeli Ministry of Culture Award for Young Choreographer; The Israeli Ministry of Culture Award for Best Small Ensemble in Dance; The Tel-Aviv Municipality Rosenblum Awards for Excellence in the Performing Arts in both categories: “Promising Artist” and “Excellent Artist”. She has been commissioned by Dance Theater Workshop and The Kitchen (New York City), Montpellier Dance Festival (France), the Hebbel Am Ufer (Berlin), Centre National de la Danse (Paris), The Grand Theatre (Groningen, Netherlands), Les Subsistances (Lyon, France), and Theater Freiburg (Germany). In 2007, the Yasmeen Godder Studio opened in Jaffa, a home for all of her company's activity and projects including creation processes and rehearsals, open classes and workshops for professionals and non-professionals, community exchanges, production and artistic support of young choreographers as well as performances.