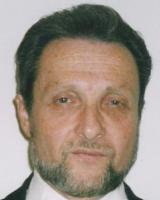 Born in Nizhny Novgorod Russia. Began his musical education on the violin at the Gorky Academy of Music and completed a second degree. He continued his studies at the St.Petersburg Academy of Music, studying conducting with Arvid Jansons and son Marris Jansons, currently the musical director of Amsterdam's Royal Concertgebbouw. There he completed a third degree. He holds a diploma of the Forth Soviet Union Conducting Competition. He served as musical director of several orchestras in Russia. As guest conductor he appeared with the St.Petersburg Philharmonic and National Orchestra of the Russia, the Moscow Symphony Orchestra, the Mussorgsky Opera Theatre in St.Petersburg, as well as the Hamnitz Orchestra in Germany. He also appeard with many well - known soloists.

In 2002, he published his comprehensive doctrine "Profession Conductor". Currently,he teaches conducting at the Jerusalem Academy of Music and Dance and regularly conducts master - classes abroad.