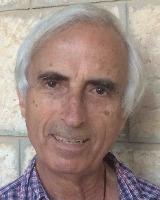 Amatzia Bar-Yosef grew up in Jerusalem. He is a graduate of the Jerusalem Academy of Music and Dance in piano (1973). He continued his piano studies at Julliard School in New-York and in 1976 received Post Graduate Diploma. During the years 1976-1986 he taught piano at the Conservatory of the Jerusalem music Academy. Meanwhile he completed his studies for B.A. degree in Biology and Mathematics and for M.A. and Ph.D. degrees in Ethnomusicology at the Hebrew University. His thesis for M.A. degree dealt with Arabic folk music from the Galilee and the Muthallath.

His doctoral thesis (1999) presented a cross-cultural model of structural analogy between pitch and time organizations based on comparison between Arabic, Western and gamelan (music from Indonesia) musics. From 1989 he instructs the gamelan workshop in the Musicology Department of the Hebrew University and leads the gamelan performing group.

He teaches at the Oriental Music Division of the Jerusalem Academy since the day it was established the following courses: History of Arabic Music and Folk Arab Music, and since 2010 also the course: Arabic music and its Turkish and Persian "sisters".