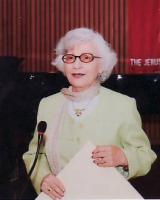 Bibiana Goldenthal was born in Romania and received her musical education at the Music Academy of Bucharest.
She settled in Israel in 1963 and since that time has been appearing regularly as soloist with major orchestras and the Israel National Opera.
Miss Goldenthal was the recipient of a scholarship from America Israel cultural Foundation, which enabled her to pursue voice training in Vienna.
After her return home (1968), she appeared in Music Festivals (Israel, Florence, Spoleto, Edinburgh) and in many Opera houses in Italy, USA and Holland, under the baton of such conductors as T.Shippers, A.Dorratti, A.Zedda, Z.Mehta, G. Bertini and M.Rodan.
She also recorded recitals on radio broadcasts in Israel and abroad.
Since 1982, she is a voice teacher at the Jerusalem academy, and between 1993-96 was head of the Vocal Department.
Many Academy graduates who studied in her studio are today singing in Opera and concerts around the world.