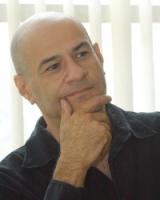 Born in Jerusalem, Prof. Ari Ben-Shabetai studied composition with Mark Kopytman at the Jerusalem Rubin Academy of Music, and with George Crumb and Richard Wernick at the University of Pennsylvania,U.S.A., where he received a Ph.D. in Composition.

He has been a Faculty member at the Jerusalem Rubin Academy of Music since 1987, teaching Composition as well as Orchestration, Form & Analysis etc.

Influenced by the contemporary music of the 1980-90's and Oriental music, Ben-Shabetai can be categorized as one of the earliest composers of the post-modern style, his own individual style incorporating influences of heterophony, post-impressionistic harmony, minimalism as well as influences of modern rock and jazz music ('Tan-Du Blues" for Saxophone & Piano, 'Hard Rock Shock' for mixed ensemble, 'Deus Ex Machina' for electric violin & DJ).

Ari Ben-Shabetai has won many awards, scholarships and prizes both in Israel and abroad; his 'Sinfonia Chromatica' won the first prize in the Israel Philharmonic Orchestra composition competition and taking the work on tour to Germany, U.S.A., France, and Italy with Maestro Zubin Mehta conducting. 'Magreffa' was commissioned by Maestro Lorin Maazel for the Pittsburgh Symphony Orchestra in 1995.

Works by Ari Ben-Shabetai have been selected for performance at many international festivals. His Piano Concerto was highly acclaimed when it received its world premiere at the Asian Music Festival Japan 2000. Ben-Shabetai's chamber opera 'Aya No Tsuzumi' (The Damask Drum), composed to his own "gibberish" libretto and based on the 14th century Noh Theatre play was commissioned and premiered at the Tel Aviv Biennale for new music 2004 with unprecedented success.

Ari Ben-Shabetai is three times the recipient of the Israel Prime Minister's Award for composition. Ari Ben-Shabetai was Chairman of the Israel Composer's League for four years, during which period he founded the Israeli Music Center (IMC) publishing house and produced "Psanterin" - a 9 CD Anthology of Israeli piano music.